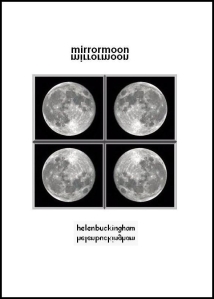 I’ve said it before and I’ll say it again: what I love most about Helen Buckingham’s poems is their immediacy. It takes years of study, buckets of patience and a very keen eye to write a good haiku, but to make the haiku appear effortless and spontaneous takes some kind of wizardry. There aren’t many writers out there who have this talent, so when a new collection by Helen Buckingham is published you know you’re in for a rare treat.

Mirrormoon is the follow-up to Helen’s Water on the Moon – a collection that prompted writer and artist Pamela A. Babusci to remark on the poet’s knack of making us want to revisit the poems again and again. With Mirrormoon, Helen has prompted this reviewer to re-emphasise Pamela’s comments. These are haiku and senryu that, like the moon itself, inspire us to go on looking and looking:

Having grown up in a house that backed onto a scrap metal yard, I know all too well the sound of that crane. And despite the ‘love at first sight’ that existed between the poem and I, I have found myself returning over and over to this tiny, enormous image. The same has happened with most of the senryu, too:

full moon
his glass
all head

Helen’s often minimalistic style lends great strength to her senryu. What is often seen as a flippant, off-the-cuff brand of poetry is only reinforced by the brevity that Helen has mastered. And then there are those senryu that place Helen’s poetry firmly in the present:

Helen isn’t a poet who’s afraid to look for haiku and senryu in the stuff of modern living. Whilst every one of the poems in Mirrormoon includes a reference to our oldest of friends, the moon, there’s also the mention of Pringles and Mars Bars and allusions to goth teens, cash points and cellulite!

Finally, if one is pushed to find a flaw in this delightful collection from one of Britain’s best writers of micropoetry, it is that the poems stop at page 24. I only hope, as the moon shrinks in the window of our rocket, that Helen is cooking up plans for another lunar mission in the near future.